In partnership with the Watershed Festival

The Rehearsal Hall (The Tett Centre for Creativity and Learning)

Breaking into the arts world can be a real challenge.  Agents, producers, gallery owners….and so many voices trying to be heard.  Sometimes it’s best just to do it yourself! Composer and artistic director Dean Burry talks about the challenges and rewards of being your own champion and creating a career in the arts for yourself. 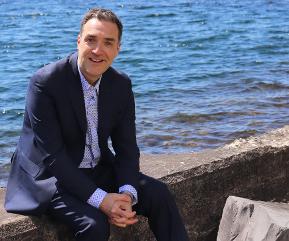 Composer and librettist Dean Burry has become one of the world’s leading composers of children’s opera, his works receiving performances across Canada, the United States, Europe, China and Brazil. His recent engagement as Artistic Director of the Canadian Children’s Opera Company saw the organization double in size, and included the creation of the first ever Toronto Festival of Children’s Opera, a European tour of the critically-acclaimed production Brundibàr, and a star-studded 50th Anniversary Gala at the Four Seasons Centre for the Performing Arts. At over 600 performances, his opera The Brothers Grimm is one of the most produced operas of the twenty-first century and his operatic adaptation of J.R.R. Tolkien’s The Hobbit recently received its European premiere to sold out houses in Ljubljana, Slovenia. In 2018, Burry accepted a professorship at the Dan School of Drama and Music at Queen’s University in Kingston and is the  founding Artistic Director of the Watershed Festival - Reimagining Music Theatre.

Major compositions include The Hobbit for the Canadian Children’s Opera Company and Sarasota Opera, The Scorpions’ Sting for the Canadian Opera Company, The Mummers’ Masque for Toronto Masque Theatre and the CBC serial radio opera Baby Kintyre (released on the Centredisc and Naxos labels in September, 2014). His most recent compositions include Tempest in a Teacup, which premiered in Guiyang, China, The Bells of Baddeck, Shanawdithit (Tapestry Opera and Opera on the Avalon), Sea Variations, a song cycle for Canadian Art Song Project and tenor Michael Colvin and String Quartet No.1 (New Orford String Quartet/Prince Edward County Chamber Music Festival). The opera Shawnadithit was awarded the 2020 Dora Mavor Moore Award for Outstanding New Opera.

Burry was the 2011 recipient of the Ontario Arts Foundation’s Louis Applebaum Composers Award for excellence in the field of music for young people.  He is currently working on the opera Il Giudizio di Pigmalione and Tracing Colville, a new work for the Kingston Symphony Orchestra.